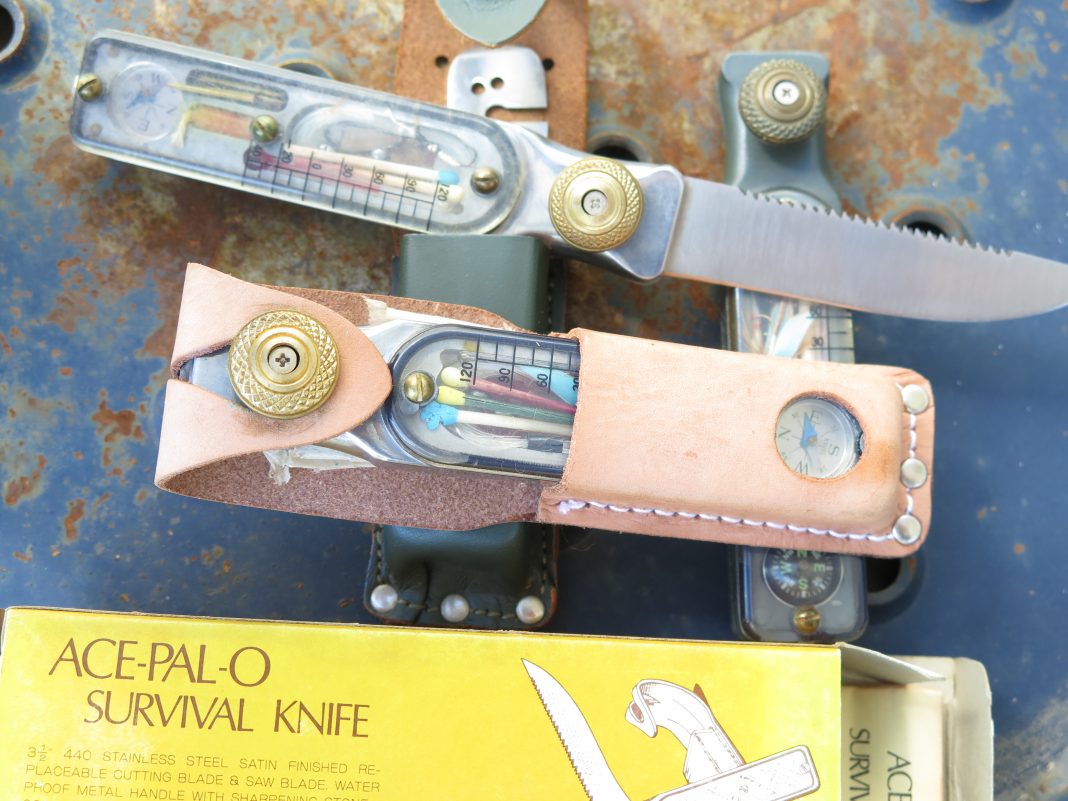 Lots of shiny metal and strange looking “high tech” gadgets. That’s the way we often characterize the future in movies, or at least we sure did back in the 1950s and 1960s. Think of Star Trek or some other space film from a bygone era. Wow, there were some unusual looking tools and accessories in those films – the way of the future.

ePrague Knives often gets the opportunity to acquire many vintage new old stock items from Japan. Among these were four space-age survival knives that looked like something out of one of these 1950s-60s era films. And in fact, they were futuristic-looking tools that were advanced for their time. But one French blog said the “design of the contraption is closer to the Soviet electric toothbrush than the survival knife.”

Despite its looks, the Ace-Pal-O Survival Knife was ahead of its time. Designed in the late 1950s and first patented in 1959 by Lloyd Dowdy and Albert Daughtry of Eugene, Oregon, this Utility Handle knife had some unique features. It must have been the first blade changer knife design to be patented. Among others, Stanley, Victorinox, and Kai (Kershaw) have cited the design (although under a later patent by Daughtry of the same style) as a source in later patented designs, including blade changer designs.

The following is part of their original patent application description:

“The present invention relates to utility handles, and particularly those adapted to be used in connection with implements, such as knives, wrenches, screwdrivers, pliers, axes, shovels and so forth.

The primary object of the invention is to provide an interchangeable utility handle to be used for attachment to tools forming a part of emergency kits carried by hunters, campers, on airplanes, boats and other places where tools are used.

Another object of the invention is to provide a utility handle of the class described above in which is incorporated a compass, and waterproof compartments for carrying matches, pencils and the like, adapting the same to emergency kit use where heat, cold and moisture may be encountered.”

The history of this tool is obscure, but with a little work and luck we have produced a brief overview of what’s out there.

The knife was designed by Dowdy and Daughtry as mentioned above. They applied for the patent in 1957 and the US Patent Office granted it in 1959. The patent was mainly for the handle itself, and the designers obviously intended it to be applied to many different types of blades and tools. They pictured a blade with a measure and saw. But interestingly, a hatchet, shovel, and crescent wrench as well. The thin blade attachment point would have had to be thicker to accommodate these.

The main feature and primary contribution to knife history is the development of the blade changer feature, as they put it, “to provide an interchangeable utility handle” to attach different tools, or blades. Below are previous patents cited (in chronological order) that show how others before them came up with new ways of attaching a rotating blade, but they never arrived at the point where these two inventors did.

They must have made prototypes, but it seems that they never actually made a production version during the 1960s. They obviously planned to produce the knife in quantities since they acquired a patent for the knife in Canada in 1962. 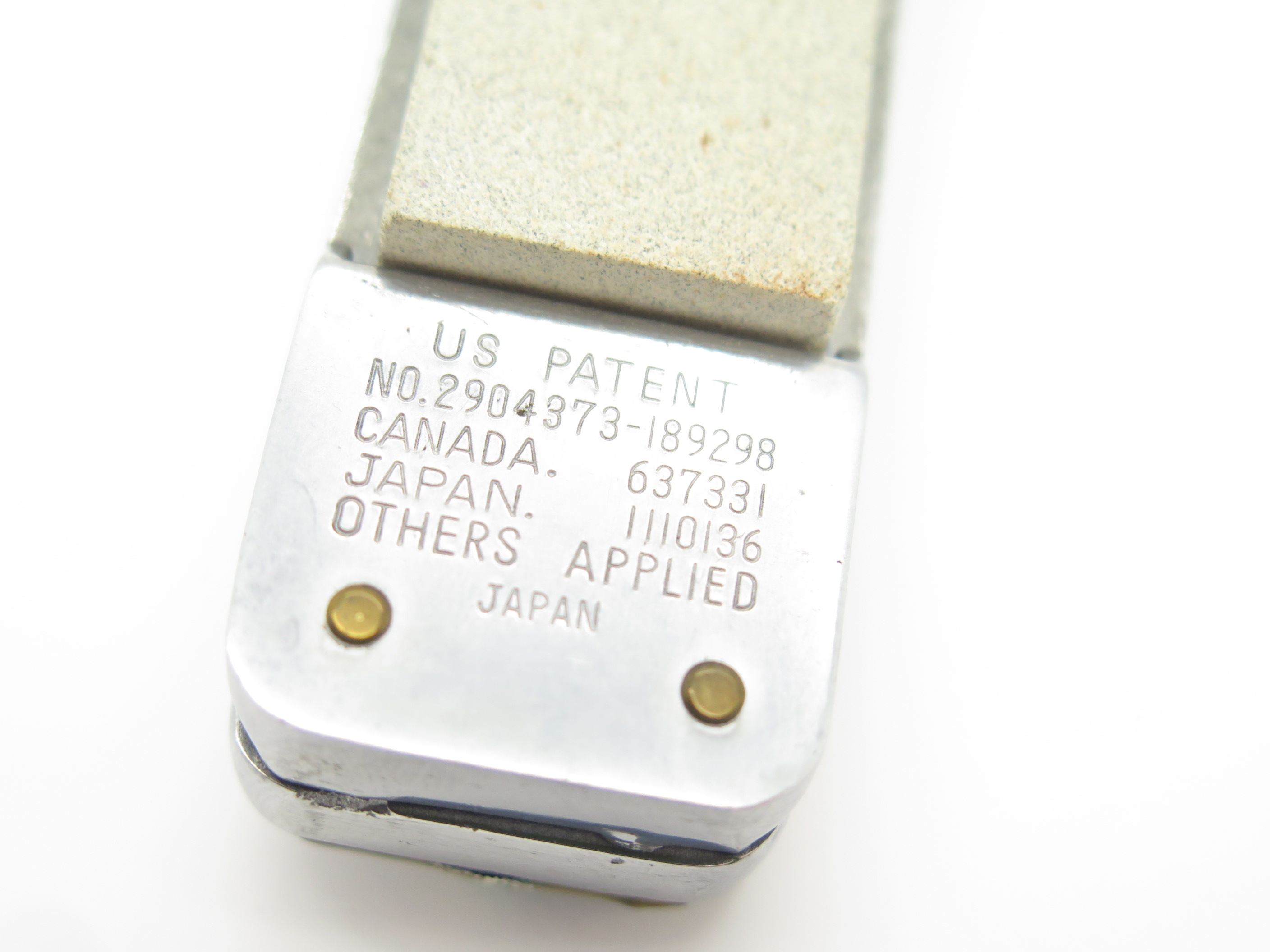 However, there seems to have been no production during that time period, although they must have planned production for the knife during the late 1960s into the early 1970s because the Japan patent was acquired in 1973.

This knife always struck me as a 1960s production era knife, but the existence of a patent acquired in 1973 stamped into the back of the handle dates the Japan production from the 1970s at the earliest.

There is something different about the 1973 Japan patent though: it only includes Albert Daughtry as an inventor. Another patent approved in 1974 in the United States has only Daughtry as an inventor and this should actually be the correct patent for the ACE-PAL-O. The new patent, number 3851986, is for a new type of lock that the ACE-PAL-O features. Notice the difference between the lock drawn out above and the new lock below. 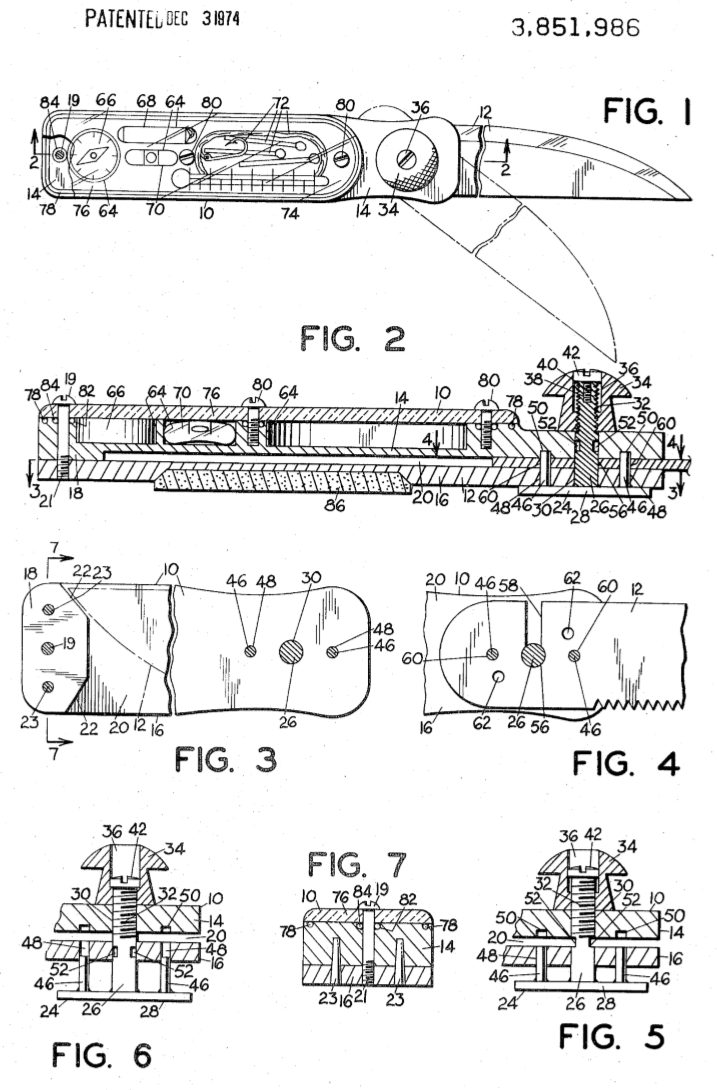 The pivot found on the ACE-PAL-O is the new pivot patented in Japan in 1973, not the previously patented one from 1959. Daughtry explains the difference in the new patent documents:

This invention relates to new and useful improvements in a utility instrument. 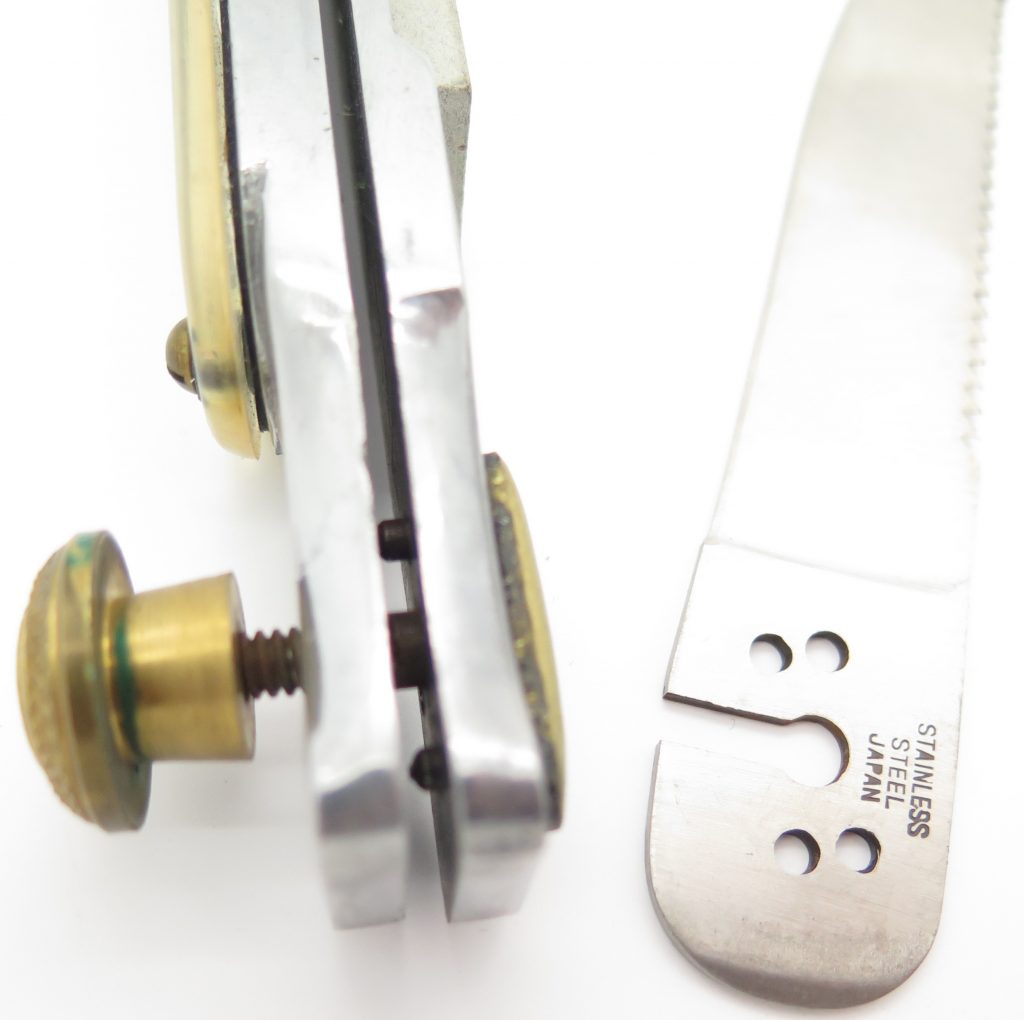 So this was a big change to the previous design.The new design also has a flattened pivot pin, like later Case and Buck blade changers had, making this a significant change towards the modern blade changer design.

This is the lock that is found on this later knife, not the one from the previous patent. Why did they use the previous patent for the ACE-PAL-O? Maybe to accelerate production. Perhaps they started production in 1973 when the Japan patent was approved, before the new lock patent was approved in the US. At any rate, it seems that none of the ACE-PAL-O knives has the new patent number on them. 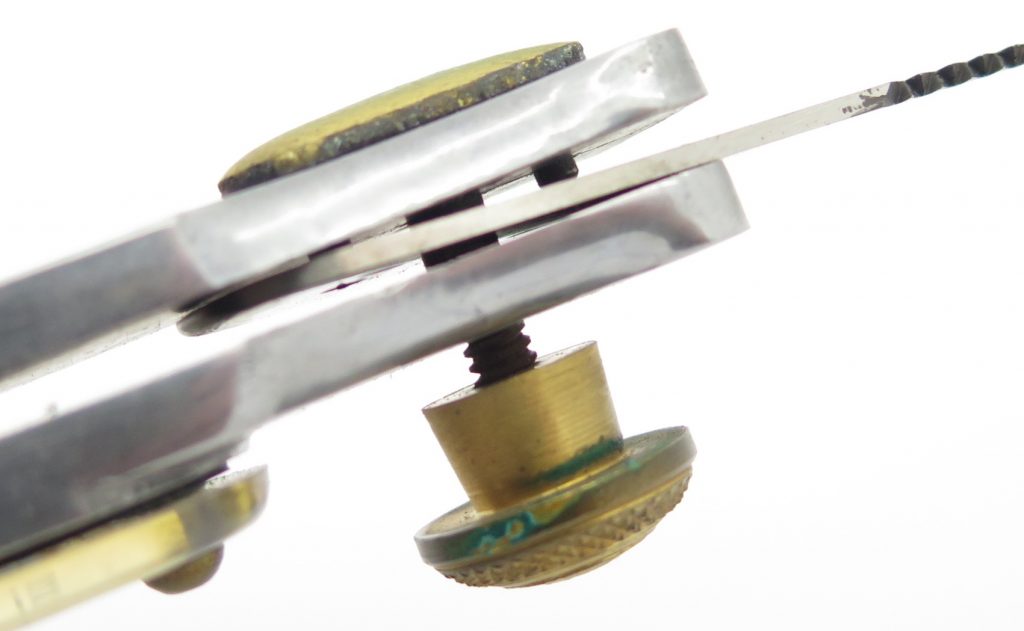 The Japan-made version has the following features: 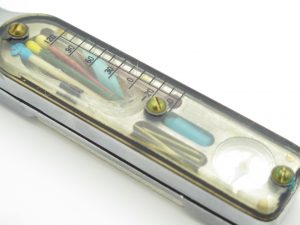 Who made the knife in Japan for Ace-Pal-O? We may find out later and will update this article, so stay tuned. There were several capable makers: Inagaki, Kato, Hattori, Fukuta, Imai. There is no reference on the box or instruction paper. Others have referenced BCB out of Great Britain, but that was a company who had the knife made for them, but not the actual manufacturer.

Our research, however, concludes that the “APOLLO SPACE AGE SURVIVAL KNIFE” was most likely manufactured prior to the ACE-PAL-O version. Examine the pictures below of the two versions. Notice the Japan patent number is missing on the APOLLO, but is stamped on the ACE-PAL-O. Plus, the Canada patent was granted in 1962, and it is on the APOLLO version! Looks like the ACE-PAL-O came after the APOLLO – after they received the previous “applied for” Japanese patent.

Why the change? Maybe they first marketed it as APOLLO, then found that there were trademark problems with the name and then changed it to ACE-PAL-O. One of those mysteries of blade history… 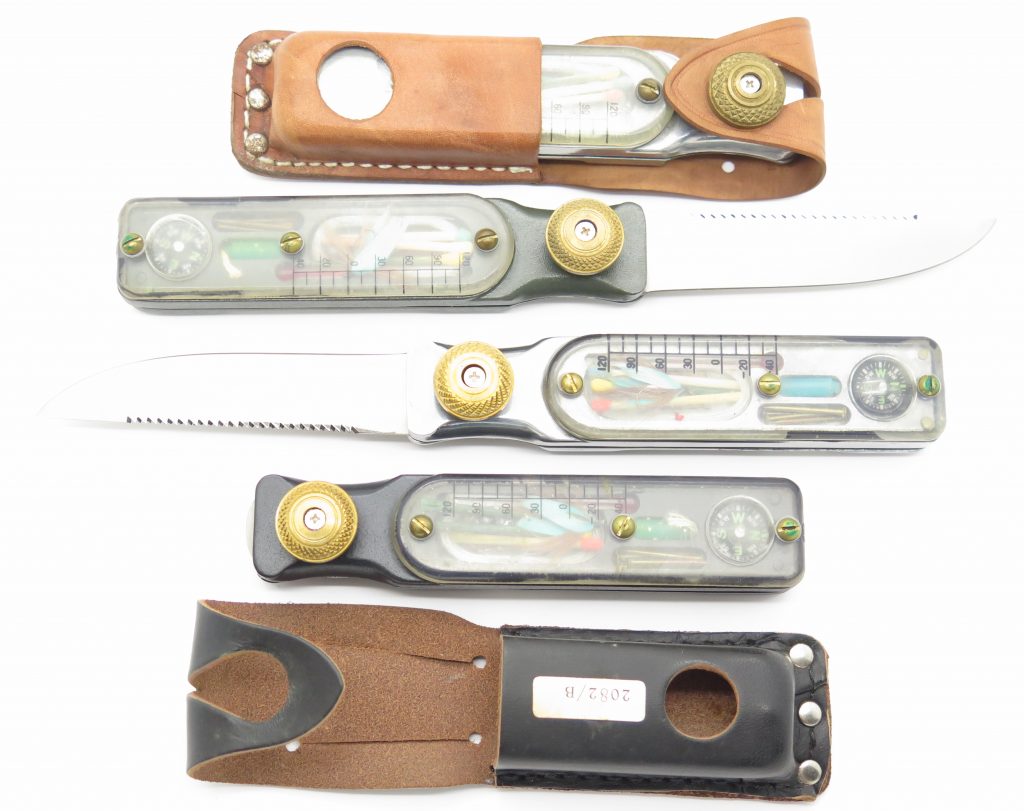 Except for the one APOLLO, our examples are all ACE-PAL-O stamping. We do have three different colors available. This is a rare knife anyways; and the silver aluminum handle model seems to be the most common. Of these we have just a few available.  However, the green and black we have not seen before and are extremely scarce.

WHEN WERE THEY MADE?

As for when they were made? Some have placed it in the 1960s and we can definitely understand why. We were inclined to believe that as well until researching the history of this knife. On the other hand, others have placed it at the 1980s production. The ACE-PAL-O doesn’t seem to fit into that era though — or at least not entirely.

Our guess is 1970s for the ACE-PAL-O and as early as the 1960s for the APOLLO. It may have been produced into the 1980s, but definitely belongs to an earlier production era. The ACE-PAL-O was probably manufactured around the 1973 year when the patent was granted in Japan. The APOLLO branded version though, was made between 1962 and 1973 when the Japan patent was granted. 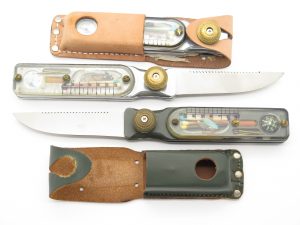 This knife is a fascinating part of knife history. It was the first modern blade changer knife. It was envisioned as a “space age” survival knife and belongs to the period of American history that sought to be the first on the moon. It is one of the first patented folding survival knives. And it is one of the most unusual knives ever made during the early modern Seki knifemaking era.

What is a Buck Buildout Knife?