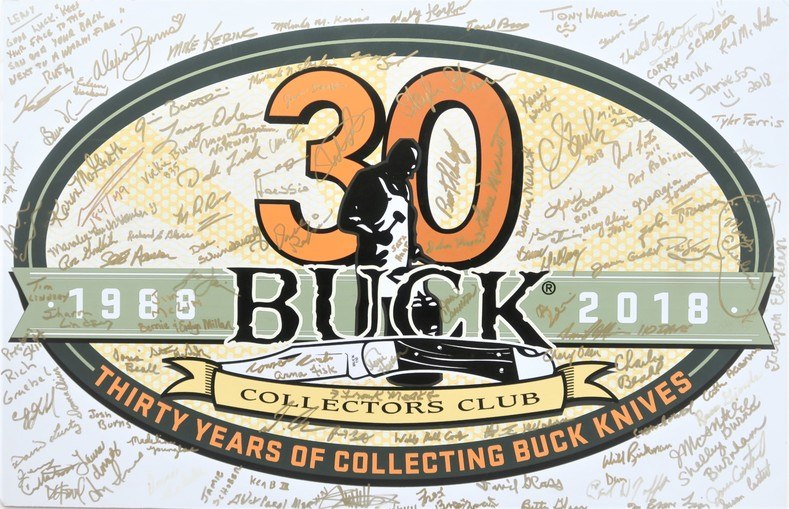 Summer 2018 has seen the sixth gathering for the collector’s club to celebrate the 30th anniversary. Events were held from July 24th through the 27th in Post Falls, Idaho at the Buck factory, the Mirabeau Park Hotel and Convention Center, as well as several picnics and a dinner cruise on lake Coeur d’Alene

On Tuesday the 24th, the club began the festivities with a banquet at the Mirabeau Park Hotel which featured Buck displays, prizes, VIP speakers, and a catered dinner. Guests were also present for a Buck Collector’s Club Hall of Fame induction ceremony. Editor of Knife Magazine, Mark Zalesky gave a speech during the opening remarks. After dinner the entire party took a group photo, making for a memorable evening.

Factory tours were ongoing Wednesday through Friday during regular business hours allowing attendees to get an insider’s view to how Buck knives are made, and the amount of hard work that goes into production by all those involved. Club members were treated to a dinner cruise on lake Coeur d’Alene to watch the sunset Wednesday evening, with DJ music by River City Productions. Dinner was served buffet style in a relaxed informal gathering of family and friends.

The Buck Collector’s Club held a fantastic event for buyers and sellers called the “knife swap” where any member could purchase or swap knives with other members. During this event were ongoing raffles and auctions, which featured Buck Collector’s Club 30th Anniversary Artisan Sets as prizes. One of the lucky raffle winners won the opportunity to meet with Joe Houser and create a custom Buck knife. To top off the night, CJ Buck was present to sign knives.

Wrapping up the 30th anniversary on Friday, club members, their family and friends gathered at Q’emlin Park in Post Falls for a picnic. Guests mingled under the grand pavilion for delicious barbecue and games for adults and children, from corn in the hole to a giant Jenga set. Meanwhile, Buck custom knifemaking legend Leroy Remer walked around to find BCCI members to gather final signatures on his poster shown at the top of this blog post. [We will get copies available, check back soon].

What a memorable event! Everyone missed the presence of Chuck Buck and they recalled his memory throughout the course of the days. His wife, Lori Buck, was a magnificent host for the hundreds of worldwide BCCI members who came to share their passion for Buck knives.

Buck continues to be a leader in the knife industry, ensuring that the legacy continues.

Seen One of These Lately? The 1995 Custom David Yellowhorse SOG Paratool